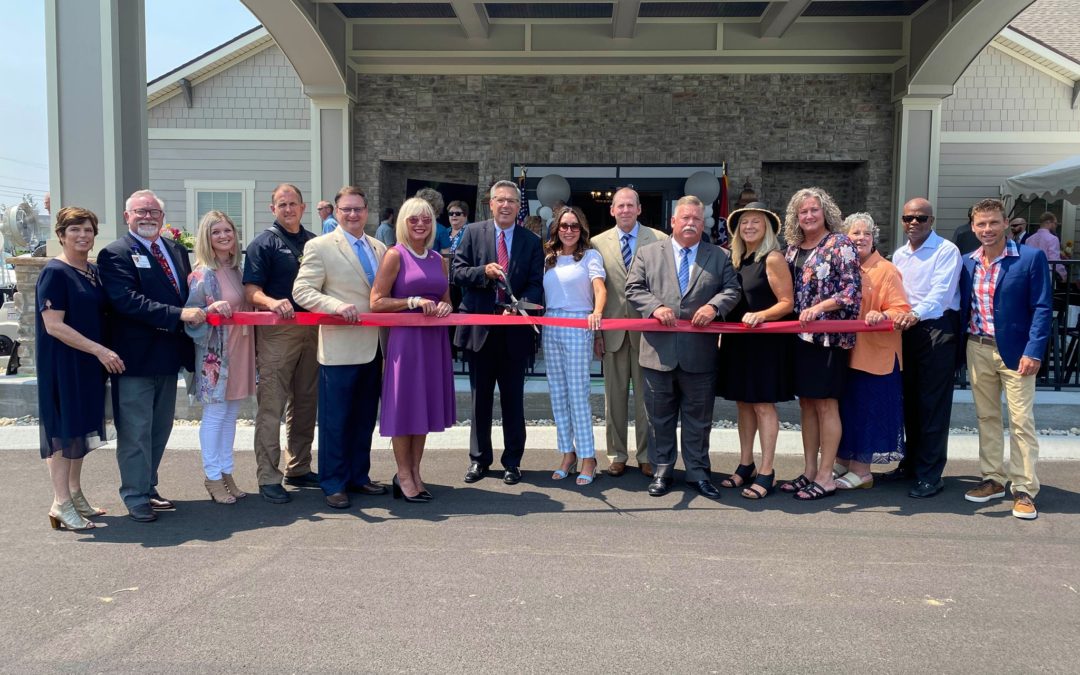 The Lantern at Morning Pointe Alzheimer’s Center of Excellence, Chattanooga, celebrated its official Grand Re-Opening on Thursday, July 29, signaling a complete comeback for the Morning Pointe campus after being devastated in the Easter 2020 EF3 tornado. In just fifteen months, The Lantern at Morning Pointe, located at 7620 Shallowford Road, went from a near-total destruction to completely rebuilt—welcoming residents back to this beautiful Alzheimer’s memory care community in grand fashion.

“This is a comeback story for not just Morning Pointe, but the heroes in healthcare,” said Greg A. Vital, president of Morning Pointe Senior Living. “Fifteen months after this building was devastated by the tornado in the middle of the COVID-19 pandemic, I’m honored that our team was able to rebuild not one, but two Morning Pointe communities. This is a day of celebration and thankfulness—that people can come back to The Lantern and call it home. What a celebration it has been!”

Morning Pointe Senior Living co-founders Greg Vital and Franklin Farrow welcomed the audience, capturing the emotion of the event complete with a celebration of the past and a forward nod to the future. First responders from the Chattanooga Fire Department, Hamilton County Sherriff’s Office, Chattanooga Area Regional Transportation Authority (CARTA), and EMS, along with city and county elected officials and many friends of Morning Pointe were in attendance at the outdoor ceremony to officially declare the campus open for business. Many of these individuals were called into action the night of the tornado to assist in the rescue operation; all 130 residents in both the assisted living and memory care buildings survived the storm.

Hamilton County Mayor Jim Coppinger spoke about the dedication to rebuilding both The Lantern and the assisted living campuses, acknowledging Morning Pointe ownerships’ resilience in vowing to rebuild after such total devastation. “We are so grateful for what Greg Vital and Franklin Farrow have done for this community,” said Coppinger. “They pledged to rebuild this Alzheimer’s building, and not only that, but they have taken care of all the residents who were displaced on that Easter night, finding places for them to go during the rebuilding process.”

Tennessee State Representative Esther Helton (District 30) was on hand to present House of Representatives Joint Resolution Number 1076 to Morning Pointe associates who took exemplary care of residents in the wake of the tornado in 2020.

Brook Goodner, a Morning Pointe family member, spoke about the exceptional care her mother received at The Lantern before, during, and after the tornado, saying, “One of the main factors in bringing our mother to live at The Lantern was trust. We knew this was the right place for her—it was a unanimous decision. The kindness and compassion shown to our mom and all the residents was one of a kind.”

Special recognition was also paid to the construction trades and general contractor ETSB, LLC for the time and attention to the rebuild during the tornado and COVID-19 pandemic.

The Lantern at Morning Pointe Alzheimer’s Center of Excellence is the region’s choice for memory care, offering one-level living across 43,000 square feet conveniently located in the East Brainerd community. The Lantern’s Meaningful Day™ purposeful programming offers two levels of memory care: Lamplight, which is for those living with early to moderate stages of Alzheimer’s disease. The Lantern program is geared toward those living with late to moderately severe stages of Alzheimer’s. Both levels offer the Teepa Snow Positive Approach to Care® and the Best Friends Approach™ methodologies. Medication management, around-the-clock nursing staff, and Farm-to-Table fresh dining program round out an impressive suite of services offered to those who call The Lantern home.